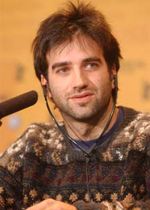 My first film of the festival proper was the Spanish comedy Reinas ('Queens'), a film about five gay couples (one of whom is played by latin hunk Daniel Hendler, seen left at a press conference in Berlin) who are about to be married as part of the country's first legal gay en-masse wedding ceremony. While their pre-nuptial dramas are part of the story, the film's real focus is on their mothers. Four of Spain's favourite actresses, the fabulous Carmen Maura, Marisa Paredes, Mercedes Sampietro and Verónica Forqué, together with Argentinian Betiana Blum play their mums, an almost Almodovarian collection of actresses, judges, nymphomanics and hoteliers. It is they who are the 'queens' of the title. The film's bright, colourful opening credits quickly establish the tone of the movie to come. Strong performances, a quick-witted script and attractive cinematography ensure that it entertains despite trying to tie up all its threads too quickly.

My next session was the girls' shorts package Boob Tube. I look at shorts sessions as being like a fiction anthology - I never expect to like everything. There was nothing I diskliked in the session this time, which is always good! Highlights included Dani and Alice, a concise, well-crafted film about domestic violence; the academic yet poetic A Lover's Discourse: Fragments, the soundtrack to Who's the Top and the will-we-or-wont-we-have-a-baby comedy/drama Hvem Du End Er (Come On Baby).

Finally I watched the gay slasher pic HellBent, despite having already previewed it on DVD, as I wanted to watch it with an audience. People cringed, gasped, laughed, jumped in their seats, and groaned in that grossed-out but entertained way. Thoroughly entertaining, although the print quality of the film was poor.

I've already missed my first planned session for today, as I had a couple of things to do at home, but I'm heading back into town shortly for my second full day of films. A slight change of plans tonight though; I'm skipping my last two films for the night in order to DJ in the festival club!
Posted by richardwatts at 12:41 pm